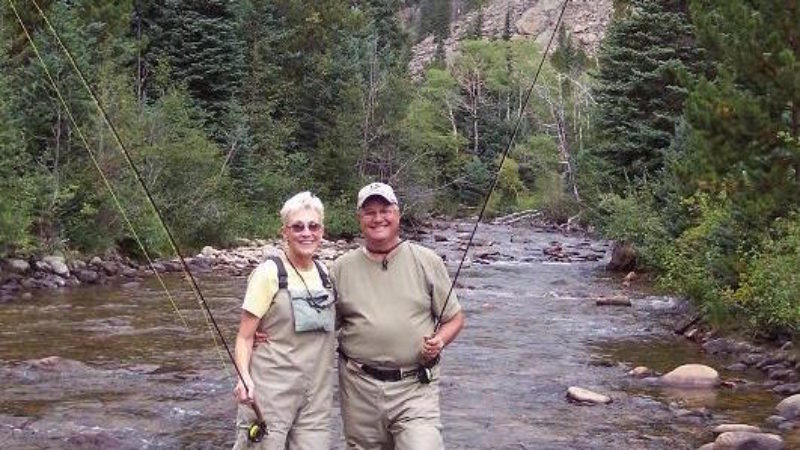 At Shadowcliff, we love a good love story and this one is as good as we’ve heard. (And, we’ve heard a few.)

But first, some introductions. In January, Hillary Mizia, Executive Director of Shadowcliff, named Susan & David Haverty as the new general managers, beginning this season. “They have a wide range of work experience that makes them uniquely qualified for Shadowcliff.” Hillary said. “Plus they are hella funny, and if I’ve learned anything, it’s that humor is key,” she added.

Now, back to the story.  Susan and David grew up in the same hometown (Ottawa, KS) and went to high school together.

They even had a “mostly forgettable” first date. “I’d call it the worst date ever,” said Susan. They both went their separate ways for college, and happened to meet up again six years later in Kansas City. They went out that night, and the next. And, the next one after that. They spent time together every day, for six months. Then they got married. It’s been almost 48 years of wedded bliss, as the saying goes. Susan reports that Dave says 25 happy years out of 48 isn’t bad!

They spent their years in careers and raising a family that kept them roaming the country. Dave’s jobs included time at International Harvester where he was the VP of Aftermarket Parts and a consulting position with Guinness Brewery that required a stay for a year in Jamaica. Susan worked in public relations and marketing for a utility company. At one point, she worked at a theme park called Holiday World in Santa Claus, Indiana. (Yes, it’s a real place – I Googled it)

It was the first theme park in the nation, even before Disneyland and originally called Santa Claus Land. They also spent time raising three children and they’re looking forward to using their off-season from Shadowcliff to visit their 13 (and counting) grandchildren, stretching from Oklahoma and Kansas to North Carolina. Like any proud grandparents they’ll happily share details of their grandchildren’s involvement in sports, music, and art on both the high school and college levels.

Post career and raising a family, they have enjoyed managing guest experiences and expectations from the Rockies to the Midwest. They’ve operated RV parks and apartment complexes, and were tour guides at the Grand Canyon. When asked what these experiences have helped them to learn, Dave quoted the old adage, “’The customer may not always be right, but they are always the customer.’ You do what you have to do to make sure that the customer is satisfied.”

Susan and David assume that the first year will be an interesting learning-experience. When asked about the youthful staff, their eyes lit up. “We’ve had lots of staff in years past that were made up of younger people. We’ve been involved with youth groups, had volunteers and workers who were younger. We’re looking forward to that,” David said. They once ran a pumpkin patch/ Christmas tree lot in Santa Clarita, California. “We hired staff right off the street. And, we had these dire warnings from the owners that people would steal from us. But it was one the best experiences. We defied projections in pumpkins and didn’t lose a single Christmas tree,” Dave added. Susan is looking forward to meeting the young people that are passing through Shadowcliff both as staff and guests. “I’m most interested in hearing their stories,” she said.

When asked if this was just a stop-over for them, they both shook their heads, emphatically. “We’re not looking for a one-and-done as they say. We’re looking at a several year commitment on both sides,” David said. They found the ad in WorkingCouples.com that Hillary had placed just about the time they were ready to accept another position. They held off taking the other job until they had a chance to visit with Hillary and get a feel for the GM job.

“Dave and I think our age and experience, the things we’ve seen and done, will be a great fit for Shadowcliff,” Susan added.

We couldn’t agree more and hope you’ll join us in welcoming our new general management team!