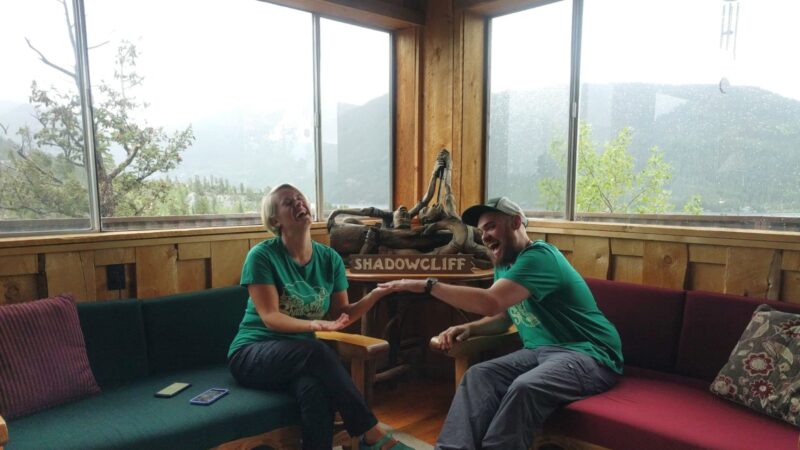 The CDT Experience: An Interview with Shadowcliff Employee Travis Glynn

The Continental Divide Trail (CDT) was established by Congress as a National Scenic Trail in 1978. Traversing the spine of the Rocky Mountains, this trail begins and ends at the Mexico and Canada borders, covers 3,100 miles in total, and winds its way right through Grand Lake!

We at Shadowcliff have the great fortune of interacting with many CDT thru-hikers during our season. In fact, last summer alone, over 150 hikers passed through our doors! One such hiker, Travis Glynn, has his own unique story to tell.

During the 2018 season, Travis was hiking the CDT from the Mexico border when he broke a bone in his foot and found himself unable to continue. He made his way (limping) to Shadowcliff, where he was invited to join the rotating staff and stayed on for the remainder of the season.

Lucky for us, Travis returned to Shadowcliff for the beginning of the 2019 season, with plans to continue on and complete the trail. Excessive snowfall prevented him from setting out as early as he hoped, but he is now on his way.

Before he departed, I had the opportunity to sit down with Travis and ask him some questions about his experience out on the trail:

Emily: Why did you decide to hike the CDT?

Travis: Well...as the 3rd trail…so I hiked the Appalachian Trail first, then the Pacific Crest Trail, leaving the final trail to be hiked...so, it was there, I was there…

E: No deeper meaning for you? No broken heart to get over, no lost job to recover from?

T: Um, haha! No, no. Not really. I just wanted the challenge of finishing off the Triple Crown of hiking.

E: What is the most challenging experience you have gone through on the trail?

T: Hmmm...breaking my foot (hahaha!). Yeah that was a fun deal. That was probably the roughest - just knowing that I wasn’t going to complete the trail.

E: I remember that day, when you rolled up here, you were very disappointed.

T: Yeah, well I had previously sobbed my eyes out for a few days…

T: So I was getting over it at that point.

E: You had composed yourself by then.

E: So, do you know, like, exactly how you broke your foot or…

E: And after awhile you were like “Man. My foot is really starting to hurt!”

T: Yeah, to the point where I couldn’t walk on it.

E: What do you eat out there?

T: EVERYTHING. (Hahahaha!) So, usually rice and noodles, things that are easy to boil water for. Um...tortillas, peanut butter, salami, cheese, trail mix of all kinds, chocolate.

E: So my understanding is you wanna get the most calories in the most efficient way possible, is that right?

T: Yeah, yeah. A lot of CLIF Bars...Pop-Tarts. Pretty much the mainstays.

E: Like stuff that’s easy to pack and doesn’t have a lot of waste product.

T: Yeah...small, compact, will fit in my pack easily.

E: Once you finish the CDT you will have completed the Triple Crown of hiking. What makes the CDT unique from the PCT and the AT?

T: The CDT is a “Choose Your Own Adventure” trail. Like, there are a lot of options, a lot of alternates, so it’s just kinda like you get to pick what you want to do, where as the others are more of a pre-established, set trail.

E: So, does it make it more challenging then?

E: What are a couple of the other things that make it more challenging?

T: Longer distances between towns and fewer people. Yeah, fewer people on the trail. So, the trail itself is not as well marked, so navigation. And probably just, like, exposure, because there’s a lot of above treeline stuff and a lot of desert stuff.

E: How do you navigate out there. Do you have some sort of app on your phone, or are you, like, old-school with a compass (haha!) how do you do it?

T: So, typically I just use an app, all the trails have their own, but sometimes I carry paper maps for specific sections.

E: What has been your favorite stretch of the trail so far?

T: OK, so, how did I find Shadowcliff...so Shadowcliff is listed on the Gut Hook app. So, I knew there was a hostel in town, and when I got to town originally, I stayed here. Why did I decide to stay? Basically out of necessity...

T: I didn’t want to go home and I wanted to try to give myself time to heal and get back on the trail, which didn’t turn out.

T: Yeah, yeah that was part of it. But, mostly it was, kinda, just to get back out on the trail. I decided to return because this is a good place and I spent last summer basically healing here and just wanted to kinda, come back and get the experience of Volunteer Weekend, opening up, all that kind of stuff, and then just continue on.

E: Cool. And, tell me one more time what is the app? Gut Hook? Is that, like, a peer-maintained app or something, like from other hikers?

T: Yeah, you can add things to it. Add comments and all kinds of stuff.

E: In meeting other hikers on the trail, have you found any commonalities in why folks decide to undertake this hike?

E: Yeah, that makes sense, it’s something like get away from it all, spend some time with yourself, figure out what’s important…those kind of things...

E: What is your most valuable piece of equipment for the trail?

T: Most valuable piece of equipment...ummm...well I guess my backpack...

T: Is that what you’re saying? Hahaha!

E: I mean yeah that’s a good point. But, like, a single piece of equipment…that has saved your butt.

T: I mean it’s kind of all one unit...but, I would say having an umbrella...for the desert...to keep the sun off you because sun poisoning is pretty easy to get. That is the single piece, like, not a necessity, but it really comes in handy.

E: What is the longest on the CDT that you’ve gone without seeing another hiker?

T: Not on the CDT really. Nothing major. Appalachian trail - lot of bears, but CDT nothing, like, frightening.

E: What are your plans after completing the CDT?

T: Uhhhh...no idea really. Just see what happens I guess. I don’t have a plan right now. No plan of action.

E: Do you have any other hikes that you’re really interested in getting to at some point?

T: Probably no more super long hikes, but I would like to go back to certain areas of the trails and spend some more time in certain places...but yeah, no more 6-month mini-vacations.

E: What is one piece of advice you have for folks who are considering tackling the CDT?

E: What did you do to prepare?

T: Nothing specific. In short of what I’ve done at the beginning of this season, just hiking around here. Other than that, nothing major.

E: How did you get your trail name “Easy”?

T: Oh, so on the Appalachian Trail I got it, for two reasons, one - easy company, and two - just, like...covering miles faster than others.

Questions from the audience:

Q: How do you charge your cell phone?

T: So, I leave town with a full charge on my phone and then I have a small battery pack that gives me another two charges. And, when I’m out on the trail I usually just keep my phone on Airplane Mode, so my battery lasts a pretty long time. Usually I make it all the way without having any problems.

E: What’s been the longest between towns?

Q: How do you get more food? Considering you’re on the trail...and you don’t have a car. How does that work?

T: Uh...hitchhiking. So, basically hit the road, hitchhike to the nearest resupply point whatever it may be. I mean sometimes it’s a gas station, if that’s the only thing around. So, you kinda have to scrounge around…

T: Haha! Yeah. But, a lot of times you can get to a small grocery store or something of that nature...but, a lot of hitchhiking…

E: So, a note for our readers: next time someone is trying to hitchhike and you see them on the side of the road, don’t automatically assume that they’re a serial killer. They COULD be a Continental Divide Trail hiker needing a lift.

Q: Do you carry bear spray with you? And, I’m also curious about your bear-proof food container.

T: OK so, I’ve never carried bear spray in the past, but I haven’t hiked in grizzly country, so on the CDT I will be carrying it when I get into grizzly country.

E: And what is grizzly country?

T: The Winds and north. So, from the Wind River range in Wyoming all the way north to the border. So, for bear containers...I’ve carried a bear canister in the past in the Sierras. But, this year I have, like, a kevlar food bag that’s supposed to be bear proof...we’ll see how that works...

Q: In your thru-hiking career, what was the biggest act of kindness that someone demonstrated to you?

T: Oh man. There have been so many! I guess taking me in and giving me full use of house and vehicle and, you know, just full reign of everything. But, there have just been countless things similar to that.

E: (Shadowcliff giving you a job…)

Everyone here at Shadowcliff wishes Travis well out there on the trail, and we hope he succeeds in his mission of completing the CDT!