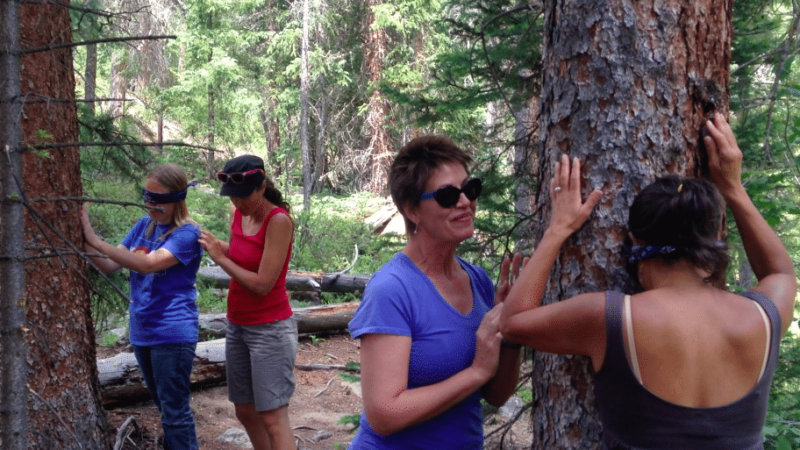 Shadowcliff recently hosted the first Sharing Nature workshop offered in the Rockies and one of only a couple that were offered in the US this year.  Sharing Nature is based on Joseph Cornell’s series of books that, according to Backpacker Magazine, “started a worldwide revolution in nature education.” His first book, Sharing Nature with Children, sold 450,000 copies in 19 languages and became an instant classic. Joseph’s books now serve as popular nature-education resources all over the globe.

Greg Traymar, the International Director of Sharing Nature Worldwide, was the leader at Shadowcliff Sharing Nature Training. Greg works directly with Joseph Cornell and believes that the process is “a very effective way to help people connect more deeply with nature.” (Greg was first featured on the Shadowcliff blog in June and you can learn more about him here.)

The training is specifically about training “trainers” – like educators, parents, and anyone who works to bring people closer to their inherent connection with nature. Greg has led groups in a total of seven countries, including the Gulbenkian Museum in Lisbon and on an archipelago in Sweden.

He was introduced to Shadowcliff by Executive Director Hillary Mizia, who has herself been a long time follower of Cornell’s work. She invited them to consider Shadowcliff as a destination for one of their trainings. “Our two organizations share similar missions. With Shadowcliff providing a physical place for connection and Sharing Nature providing a methodology, it seemed like a natural fit,” said Hillary.

“Our workshops are very experiential,” said Greg. “They are also very joyful and very practical. We’re trying to give participants the tools that they can use to be successful with their students.” One of the tools are “direct experiences,” including an activity called Meet a Tree. It helps participants to understand learning through more than one sense, but to use other senses as well. “We like to balance the intellectual learning with the learning that is from the heart, outside in nature,” explained Greg. This matches perfectly with what we do at Shadowcliff.

Shadowcliff’s proximity to nature made a big impression on the group. [blockquote align=”right”]“Our workshops are very experiential. They are also very joyful and very practical.”[/blockquote]

“What was so wonderful about Shadowcliff was that nature was right there in your face. Every direction you turn, it was dramatic, and it was beautiful! You had the sounds of the rushing water, right there. You were right in the Rockies with a lot of different animals around. You felt like you were immersed in nature. It was an extraordinary experience!”

It seems Shadowcliff made other impressions, too. “The facility was really great because you really have that Lodge feel. When I was there I felt like I was at summer camp. And it gets you into the mindset of what it was like to be a child. And as adults, we forget about play and bringing those childhood traits like joy and exuberance and getting lost in nature. Keeping alive the inspiration that we had as a child,” Greg shared. “Shadowcliff was great because you have a young staff that is very friendly and the facilities lead to immersive experiences.”

“It’s nice to work with organizations that are conscious of what they’re doing to nature. But it also fits with people who have alignment of those same values,” Greg remarked. “In many ways, Shadowcliff felt like coming home – there was such an alignment with people, how caring and sincere they were. The location itself, where people feel they are really in the heart of nature and to have those ingredients together. I can definitely see it as a place where we will want to have a continuing relationship.”

“I told Joseph Cornell as soon as I got back that this is one of the best groups I’ve ever had because it was small and the people were willing to open up. There was a lot more sharing happening.”

Shadowcliff was just as thrilled to bring the Sharing Nature training to Colorado, and hopes to do so again in the future. Be sure to sign up for our newsletter so you can be alerted when we do!

To learn more about the programs of Sharing Nature, go here.