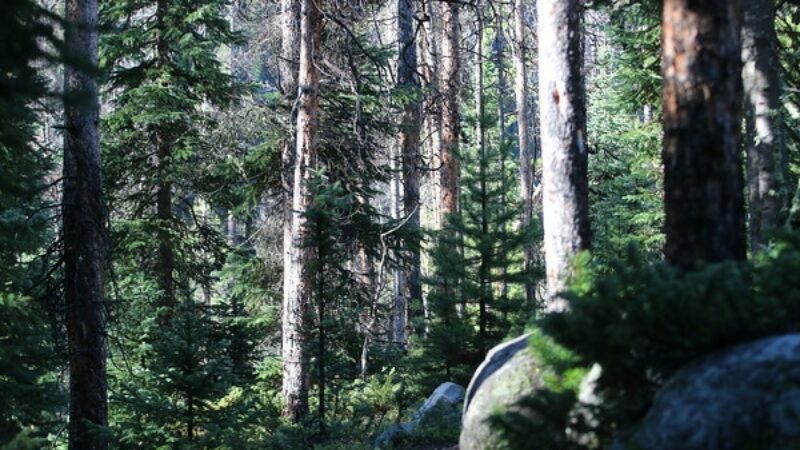 I believe nature has it right.

About diversity, I mean.

One summer morning in 2004 we experienced the first signs of the pine beetle infestation at Shadowcliff. Granddaughter Carly and her Mom were visiting, and together with our staff, we used chisels and screwdrivers to dig beetles out of recently “hit” trees.  At age 4, Carly struggled with this.

She has always been a caring kid and did not want to hurt the beetles. Adult rationalization won her over—at least for that one day! We were a force to be reckoned with! By the end of the day, we felt pretty good about the number of beetles, extricated from our lodge poles.  The next morning, we discovered that reinforcements from every division of the pine beetle army had made a laughing stock of our arduous labor.

As is often true of the human family, we wanted a quick fix designed to return things just the way we like them. Phone calls and research suggested that a nasty chemical might kill at least some of the beetles. Already possessing a healthy aversion to chemicals, we decided to learn more about these pine beetles and why they were attacking “our” trees.

We quickly learned more that pine beetles are native to pine forests and play a pivotal role in its life cycles. In ordinary times they would not be “invasive,” but these were no ordinary times. Our pine trees had taken over the forest, stifling the growth of the understory and other species. At certain elevations, they were a virtual monoculture of similarly aged lodge poles. As they aged they became increasingly vulnerable(sound familiar?) Drought further weakened the pine forest as well as our human efforts to protect forests from the natural impact of fires and nature’s thinning. These factors permitted lodge poles to prosper so densely that other species and even new lodge pole growth had trouble competing for air space, water, and nutrients.

Together, lodge poles and beetles provide a powerful example of nature choosing diversity over a monoculture, simply bringing one of nature’s operating principles or “laws” to bear on the lodge pole forest. By preventing fires, our pines thrived but became an abundant meal table for pine beetles. When we humans prevented fires, nature found another way to diversify the forest.

Back in May 2005, we planted 102 trees, varying in size from 10-18 inches in height. A few were spruce or fir but most were lodge poles as we sought to help nature do her thing.

Surprisingly, by 2008 we began seeing “green” in the forest in a new way. The aspen thrived without lodge pole competition; new ground cover and flowers hidden by dense forests now had light and water and grew in new places and numbers. The understory returned and new lodge poles sprang up everywhere. And the trees we planted? Perhaps 3 or 4 of them survived, but nature did not really need us.

New growth is so abundant that this December Judith and I returned to Shadowcliff and thinned the new lodge poles along Shadowcliff’s Laws of Nature Trail by cutting our own Christmas tree, something we would never have imagined possible in 2004.

I believe that nature still has it right. Diversity promotes growth and beauty in all living things—including human beings. In these days when so many fear diversity, want their neighbors to look and believe as they do, and want to build more fences, gates, and rules to keep others out, I am reminded that humans are part of nature, subject to her laws, and that one of nature’s laws is that she rewards diversity and always finds a way to break down monocultures—even ours.

Bob Mann is Shadowcliff’s former co-director and a current board member. He develops and inspires Shadowcliff’s sustainability workshops and is very active in creating partnerships for Shadowcliff. Both Bob and Judith Christy were the inspirations for the Shadowcliff Laws of Nature Interpretive Trail. He has agreed to write a series of articles this Summer to give us a better understanding of the Laws of Nature.