A Sense of Place – a True Shadowcliff Love Story 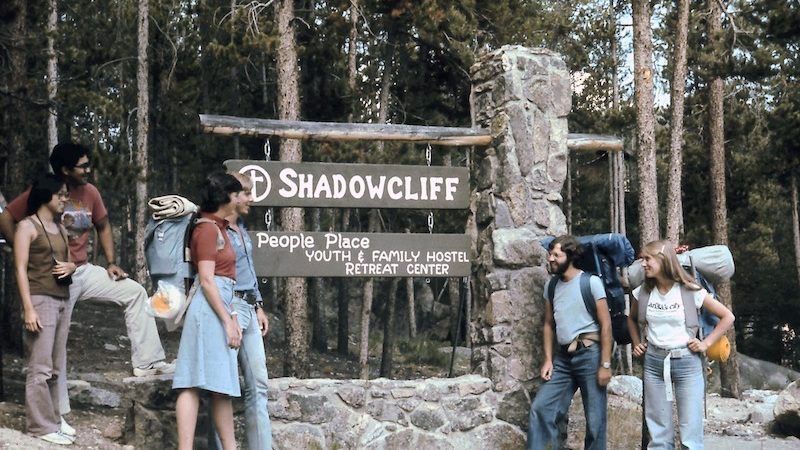 Shadowcliff is close to my heart. As a child, I traveled there with a group of people from my faith community (which included Bob & Judith and probably other Shadowcliff volunteers you may know). Different groups from our faith community (then called Ecumenikos) returned a couple of times as more and more people fell in love with Shadowcliff. My favorite vacations were those times: paddle boats, ice cream in Grand Lake, riding a horse (once — we didn’t much like each other) and mostly just smelling that heavenly high-altitude air that let me know I was in a rare environment.

About ten years later, I returned there with a faith community group for a week. At that time a young adult living in a partial hospitalization program for people with mental illness, I was working on some pretty hard stuff, mentally and spiritually. At Shadowcliff, I walked alone a lot, meditated a lot, colored, played guitar. I was glad to be there with people but connected particularly with two teenage boys in the community, each of whom was dealing with some hard stuff too. One day I stayed in the lodge and wrote a song, the chorus of which is:

I wish for you peace on the other side

I wish for you love along the way

I hope you find the power that makes it all worthwhile

I hope you find the strength to live today.

That week I felt something shift in me, profoundly, and for the first time in my highly-depressive life, I knew that I was going to be okay.

A couple of years later, I was visiting with my family in one of the cabins. As I walked through Grand Lake and over to Adams Falls, I felt like this, this was home in a way that I’d never experienced home. I wanted to live there & and I felt called to be there, but I didn’t know why. What the heck, I got a Grand Lake library card anyway.   We knew Warren and Patt pretty well, and they told us that night that one of their volunteers had become quite homesick and quit. So they were short a volunteer. I was working a part-time customer service position in Kansas City then, and living in a $200/month apartment, so there wasn’t much to packing up and leaving Kansas City and coming back to be a volunteer for a summer.   It was a life-changing summer. I grew so much, mentally, emotionally and spiritually. Warren was rough on me when he needed to be, and Patt lovingly gentle, and they balanced each other out really well. I remember being so afraid of maintenance work — I was fine with housework and kitchen, but maintenance really scared me. I tried to trade off those shifts, but Warren insisted that I hold a hammer and find a fallen branch the right size to use as a bridge log. I learned a lot under his tutelage.

My last visit to Shadowcliff was about six years ago. My father was conducting an energy healing workshop I really wanted to go to, and Bob & Judith were the general managers. I didn’t think I would be able to go, but once again, the universe moved so that I would be there, and it was another spellbinding, spirit-opening, magical week that spurred several months of growth. It was sad to me to see what had happened to the lodgepole pines — the place smelled different. But hearing Bob talk about the laws of nature and how the pine beetle was nature’s way of making room for a multiplicity of diverse plants and seeing young aspens come up gave me something different than my initial thought. And again, a leap in spiritual growth.

So Shadowcliff is spiritual for me, a place that has seen me through some very hard times and given me life lessons. I call it a place, but it is more than a place. It is a presence, a wise teacher, a spiritual leader. I’m so glad to know it’s still thriving.

Virginia Lore (nee Crabtree) shares her love of mountains and building community with her two teens,  Penn and Elessar. She now lives in Seattle, WA.