Timing is Everything When You’re Cooking 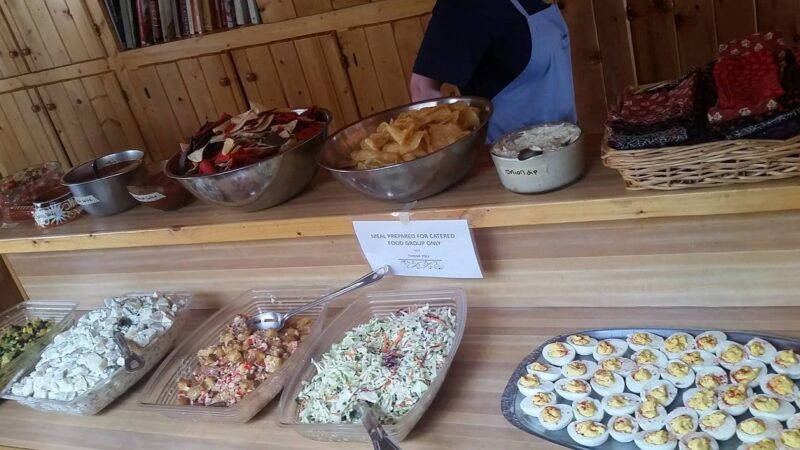 Anna Buck, this season’s chef at Shadowcliff, is originally from St. Paul Minnesota. She comes to us via New Orleans , Israel, and even Australia. To say that she moves around a bit doesn’t begin to tell the whole story.

She was referred to Shadowcliff by her friend Hannah in 2015 but the timing didn’t work out. Hillary emailed her in February and found her in Australia, ready to come experience life in a small mountain town.

Anna was looking forward to a quiet summer with a chance to experience many of the roles that it takes to run Shadowcliff, as she has dreams of running a hostel / yoga retreat someday. Utilizing her Nutrition degree from the University of Minnesota (go Gophers!) Anna is pitching in her knowledge and talent to plan gluten-free, paleo, vegan and other dietary needs of our guests.

Now she has the full responsibility of the position including planning the meals, making sure there’s enough food around for the staff, and the ordering. Sometimes she’s cooking all day to get ahead of a group or a big weekend. She has two helpers during the day from the staff. “It’s nice to have the help from the other staffers. Everyone’s been really good about pitching in to help out,” she says. “I think it helped that we became friends first before I actually took this position, so I felt comfortable working with them in the kitchen.”

Some of the early challenges have been around food availability. Places like Golden Organics in Denver provides bulk grains and local honey but challenges still exist. “There are CSAs in Fort Collins where we’ve been getting some meat and vegetables,” Anna offered. “But it’s always hard to figure out who’s going to pick it up and bring it up here, or trying to get the farmer on board, or to understand their expectations – like how much do we have to buy to make it worth their while. It’s something that I hope to keep doing because I think it’s important to source food locally as much as possible.”

Anna’s cooking is influenced by her travels. Where else might you see a middle-eastern inspired stuffed pepper and homemade baklava on the menu? “You see how different a meal can be in another place. It’s just kind of opens up your mind to possibilities,” she said.

Where else does she get inspiration for new recipes? Aside from perusing the internet, she has found inspiration at the old standby: the library. “Recently I had one called the Anti-Inflammatory Cookbook and it was really good! So I’m always thinking about each group and trying to figure out how to best cater to their specific needs.”

I have it on good authority that Anna has been killing it in the kitchen. (That’s a good thing-BTW) If you’re up at Shadowcliff this season and you get a chance to taste her inspired cuisine, make sure to let her know how much you appreciate her thoughtfulness and preparation. And, our good timing.