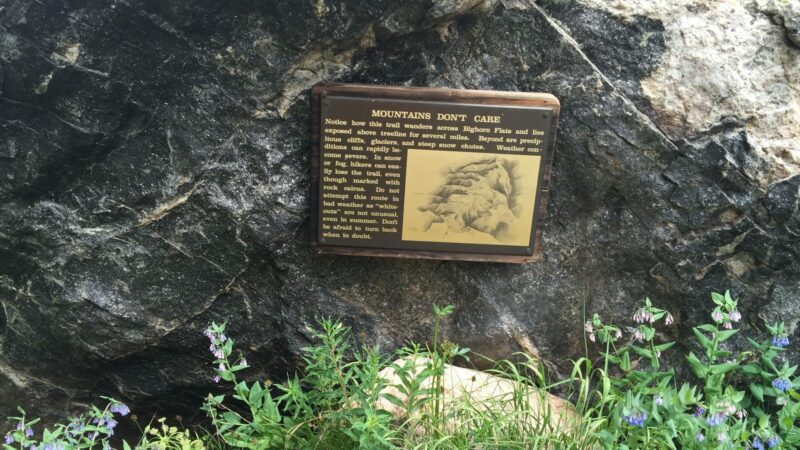 The Mountains Do Not Care!  So reads the warning as the

Tonahutu Trail leaves the subalpine and winds its way toward the alpine tundra. A bit impersonal but we get the message. There are consequences if we underestimate the effect of altitude, distance, darkening skies, thunder, or the possibility of storms and lightning. The mountains do not care if we experience unpleasant consequences, but this doesn’t mean that they are angry with us or that blue skies and clear sailing suggest their favor.

Like the mountains, nature makes no judgments. Lightning, floods, and hurricanes make no judgments about good or bad before striking. They are simply natural consequences occasioned by the systems in which they exist.

When the neighborhood cat pounces for the bird at our feeder or a mountain lion leaps toward a young deer, nature is making no judgment about these behaviors. These are simply the natural behaviors of predator and prey.

When pine beetles began attacking our lodge poles back in 2003, we were certain we must act quickly to save our trees from this aggressive predator. But we learned that pine beetles are native to pine forests and were just being pine beetles. Nature was just responding to the conditions of the forest: drought, a monoculture of same aged lodge poles, and lack of fire –conditions which, together, provided the food supply for a growing population of beetles. We learned to be sad for the loss of the trees without judging the actions of the native pine beetles as either bad or good. It was simply a natural consequence.

What Does it Mean for Us?

As often as I have shared my thoughts about nature’s laws or operating principles, I have never quite found a way to share how this one might work for people: nature makes no judgments. At some level we recognize the differences in opinions, preferences, choices and “judgments,” although we often use the words interchangeably. When pushed for distinction, we tend to reserve “judgment” to mean something that is good or bad, or perhaps right or wrong. In human societies we have created human-made laws intended to reflect what our society regards as right or wrong. As our populations increase, certain basic laws seem necessary to our species’ survival while others simply express our cultural preferences. There is a distinction. Judgment about right and wrong is far different than our expressions of cultural preferences.

We humans tend to express our preferred beliefs by creating religions, political parties, clubs, sports teams, and a myriad of institutions, each of which tend to push us into right and wrong judgments about our own behavior and that of others. All too easily, we then separate ourselves from others based on the beliefs of one or more of our chosen group’s values about “right and wrong”.

Nature’s laws teach us about consequences, but place no value such as right or wrong on those consequences. They simply “are.” I believe as cognitive creatures of nature, we naturally express our preferences, but perhaps nature’s guidance is to at least recognize the difference between personal or group preferences and judgments which proclaim the absolute “rightness” of one individual or group’s preferences over another. Ultimately, of course, nature is not bound by our human laws or preferences and it is the interconnectedness of all creatures and natural systems that determine the consequences to all life on this planet.

–Robert J. Mann, tireless advocate and board member of Shadowcliff