Stairs To The Future 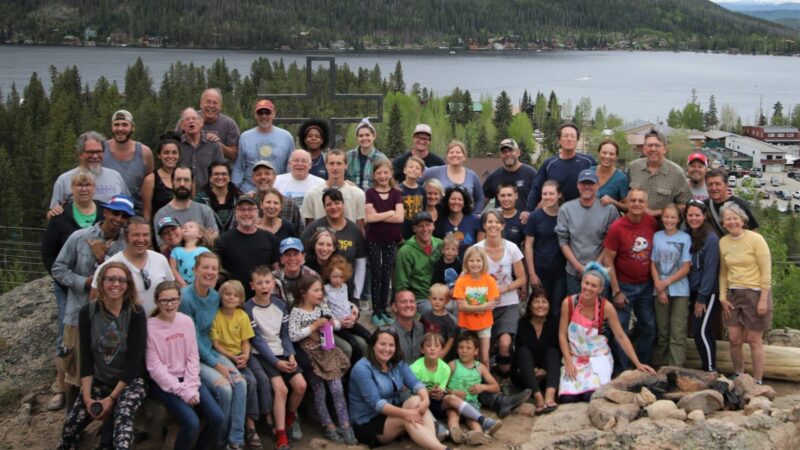 In the beginning of May, a small but mighty crew descended upon Shadowcliff and began what would prove to be one of the most challenging volunteer construction projects in recent organizational memory: replacing the stairs in Rempel Lodge . . .

Alongside the labor intensive nature and creative engineering required, this project demanded

construction activity right through the very center of the building for a sustained period of time, which wasn’t such a concern when the numbers of people onsite were small. Once folks started arriving for Volunteer Weekend, however, the bifurcation of such a critical area became more obvious. But here’s thebeautiful thing: all I heard was how amazing the stairs were. People gazed at the new openness of the space, encouraged the exhausted crew, and expressed genuine excitement at this facility improvement. Where there could have been frustration at having to use different stairs or the endless amounts of dust or the noise so near the dining area, there was support and love for one another and the place.

Those of us who came later in the month were overwhelmed by the effect the new stairs have; they truly activate the space in a beautiful way. Each time I shared a meal with the Shadowcliff family in

the dining room, my eyes wandered to the rays of sun pouring in through the north window by the library, illuminating the stained glass piece given by the HIV community in honor of Warren after his passing. It’s funny how sometimes just one thing can change your perspective of something you’ve seen so many times before. We all had an idea that new stairs would be wonderful to have, but I’m not sure that many of us knew just

how deep that sense of wonder-full would go. A heartfelt thanks to Randy Friesen for his design of this lovely new “grand staircase”, and to Grover, Creg, Chris, Kevin, Alysse, Steve P., Dave, Kevin, Michael, Steve H., Judy, Eric W., The Infamous Warren Brothers Traveling Circus and Roadshow, and the Volunteer Weekend stair crew including Thomas,  Daniel, Matt, Eric C., Mark, and Jeff. I’m sure there were other folks, too, so thank you! And of course Bob and Doug for their tireless leadership efforts with all things construction (and Shadowcliff!).

These stairs would not even have been a glint in Bob Mann’s eye were it not for the generosity of our donors. One such donor and all around visionary, Bob Berkebile, upon consideration of the impact these stairs would have, aptly referred to them as Shadowcliff’s “stairs to the future.” Our generous springtime donors also made possible the purchase and replacement of 20 new mattresses and a whole host of other things that needed to be tended to, both for May and this season. Much gratitude to all the folks who contributed the gift of treasure to allow the gifts of time and talent to flourish this May and beyond. We simply could not support the amazing volunteer effort at Shadowcliff without your financial support. Thank you.

A Community of Volunteers

Volunteer Weekend was amazing in and of itself. Nothing else at Shadowcliff demonstrates the

culture of service that literally built our organization from the ground up, quite like this extraordinary weekend. The sheer amount of work that gets done, and the joyful way in which it happens, never ceases to amaze me. It’s also a coming home, a reconnection to the friends we have come to know and love over the years of giving our time and talents to something greater. There were so many people there this year, right around 70, ranging in ages from 3 to 77! Families, new volunteers, returning volunteers, and even people who have grown up with Shadowcliff as a part of their daily lives, not to mention the amazing staff who were just about all new and instantly became part of the family.

Shadowcliff was built as a place for spiritual retreat and connection. In Warren Rempel’s words

“The nameless, faceless crowd in which we are all entangled, leads each of us to seek a new world of meaning in which we can discover once again what it means to be a person . . . To offer persons seeking a renewal of Spirit the sacred atmosphere of this quiet retreat . . . to find in this sanctuary of the Rockies a new rhythm of life–the rhythm that nature herself enjoins us to rediscover and restore to our own being.”

There are many ways to experience this at Shadowcliff, many angles at which a person can find that renewal. For me (and my family even though they couldn’t make it this year), the reconnection with volunteers and early season energy is one cherished way to do that. And with that, I’ll leave you with just two words (and a bunch of photos): THANK YOU.